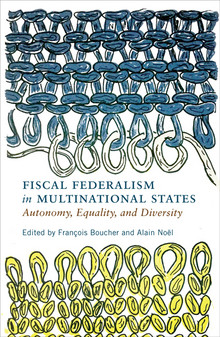 SYNOPSIS : Substate nationalism is often studied as a question of political identity and cultural recognition. The same applies to the study of multinational federalism - it is mainly conceived as a tool for the accommodation of minority cultures and identities. Few works in political philosophy and political science pay attention to the fiscal and redistributive dimensions of substate nationalism and multinational federalism. Yet nationalist movements in Western countries make crucial claims about fiscal autonomy and the fair distribution of resources between national groups within the same state.

In recent years, Scottish nationalists have demanded greater tax autonomy, Catalan and Flemish nationalists have viewed themselves as unfairly disadvantaged by centralized fiscal arrangements, and equalization payments and social transfers in Canada have exacerbated tensions within the federation. In Fiscal Federalism in Multinational States contributors from political philosophy and political science disciplines explore the fiscal side of substate nationalism in Canada, Belgium, the United Kingdom, Spain, and Australia. Chapters examine the connection between secessionist claims and interregional redistributive arrangements, power relations in federations where taxing and spending responsibilities are shared between orders of government, the relationship between substate nationalism and fiscal autonomy, and the role of federal governments in redistributing resources among substate national groups.

Fiscal Federalism in Multinational States brings together scholars of nationalism and federalism in a groundbreaking analysis of the connections between nationalist claims and fiscal debates within plurinational states.