The Department seeks to match the diversity of political concepts and ideas with the activities of future practitioners, and for this purpose it can count on faculty members with skills in many areas, many of them influential players in their community. They bring political theories to life and share the knowledge they have gained on different continents and in working for institutions that have shaped today's political landscape.

Marc-André Viau is the Lead Caucus Press Secretary for the NDP.

François Crête is Vice-President of Cohn & Wolfe, a communications agency. He was previously Chief of Staff to the former Minister of Education, Recreation and Sports, Line Beauchamp. He holds a degree in management information systems from the Université de Sherbrooke (1985).

Marie-Christine Demers is Senior Consultant in Corporate Communications and Public Affairs with Cohn & Wolfe. She holds a law degree from the Université de Montréal and has been a member of the Quebec Bar for 8 years, in addition to having completed the HEC Montréal Intensive MBA program (2009). She develops public affairs and community relations strategies for companies and organizations in various public and private sectors. Ms. Demers has a real interest in political and electoral strategic issues, along with economic development, environment and sustainable development. She also sits on a number of boards of directors and committees.

Christian Bourque is Executive VP and Senior Partner with Leger Marketing. He previously worked as Research Director and spokesperson for the Montreal and Ottawa offices of Angus Reid (today Ipsos-Reid). He is a PhD candidate in Public Administration at Carleton University, and has taught research methods at the University of Ottawa and Carleton University.

Éric Desrosiers is a journalist and economics columnist with Le Devoir and a frequent contributor to other media. He began working for the paper in 1998, and over the years has also covered current affairs and municipal politics, after working for Le Canada français, a weekly in Saint-Jean-sur-Richelieu, and La Presse. He studied politics, with a PhD in the field of democracy in the global era from the Université de Montréal, a master's degree focusing on Parti Québécois policies from McGill, a bachelor's degree from Laval, and a year of law at the Université Paris I Panthéon-Sorbonne.

Esther Bégin is an author and journalist. She served as a correspondent in New York from 2009 to 2012, and was also anchorwoman with LCN, TVA and TQS (now V télé). She began her career in journalism in 1990 at CFCM-TV (Québec City) and on the Salut, Bonjour! show.

Ziyad Clot is an international lawyer in Paris. After graduating from the Université Panthéon-Assas (Paris II) and Sciences Po, he was recruited by the Palestine Liberation Organization (PLO) as a legal advisor responsible for refugee issues, with the Negotiations Support Unit (NSU), in Ramallah.

Pierre Gentile is head of the Protection of the Civilian Population unit in the Protection Division of the International Red Cross Committee, in Geneva. He holds undergraduate and master's degrees in Political Science from the University of Geneva.

Guillaume Landry is Director of Programmes (interim Director General) with the International Bureau of Children's Rights, in Montreal. He manages the program on country profiles and child victims of armed conflicts. He graduated from the University of Uppsala, in Sweden, with a professional master's degree in humanitarian assistance, in 2005.

Denis Robert holds degrees from the Université de Montréal and Université Laval, and studied at the École nationale d'administration (ÉNA) in Paris. Before joining the Department of Foreign Affairs and International Trade in 1989, he spent 2 years as a Research Associate with the Institute of Intergovernmental Relations at Queen's University, in Kingston, Ontario. He has held various positions with the Department, both abroad and in Ottawa. He has served in Mexico City (1989-1993), Paris (1996-2001), Brussels, the Canadian mission to the European Union (2004-2007) and, more recently, in Port-au-Prince, Haiti (2007-2008). He is currently Director of the Haiti Task Force, with the Latin America and Caribbean Bureau.

John Parisella is Executive Director of the major fundraising campaign for the Université de Montréal. He served as an advisor to premiers Robert Bourassa and Jean Charest and as Quebec's Delegate General in New York. He holds degrees in political science from Concordia University and McGill University.

Stéphane Dion was born in Quebec City. He earned his bachelor's and master's degrees in political science at Université Laval, and a PhD in Sociology at the Science Po school in France. In 1996, he was elected as Liberal MP for Saint-Laurent-Cartierville. He was responsible for 3 portfolios between 1996 and 2006, as Minister of Intergovernmental Affairs, Minister responsible for Official Languages and Minister of the Environment. When he was elected leader of the Liberal Party in December 2006, he became Leader of the Official Opposition.

Miriam Fahmy is Director of Research and Publications with the Institut du Nouveau Monde, a non-partisan organization devoted to increasing public participation in democratic life. In particular, she is responsible for L'état du Québec, the annual reference work on Quebec published by Boréal.

Michel Venne is Executive Director of the Institut du Nouveau Monde. In 2007, he served as Vice-Chair of the Task Force on Health Funding. He was also a reporter with Le Devoir from 1990 to 2006.

OUR RESEARCHERS BY THEME 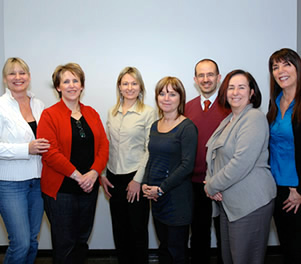